A shift in the conventions of documentary making took place in the 1960’s. In terms of technology, the televisual image has become ubiquitous, cameras were now portable and could easily sync picture/sound. With regards to western culture, the golden years of consumerism and mass media following the Second World War, prove to be a fertile bed for huge social shifts which would take hold in the 60’s; the civil rights movement, the sexual revolution, the counter culture movement, the cold war and anti-Vietnam war protests, to name a few. This plethora of perspectives demanded a mode of representation which disregarded the singular, authoritative, expository voice. There was a gap in the market for a mode of non-fiction film that wasn’t interchangeable with the advertising or propaganda of the day.

It is reductive to think of the modes, which Bill Nichols identified, developing in a completely linear fashion (2001). A period of innovation in the UK took place under the guidance of John Grierson, who coined the term ‘documentary’ in a review of Monna by Robert Flaherty. Grierson, who was put in charge of, the state funded, Empire Marketing Board Film Unit, was awarded remarkable levels of editorial freedom. Flaherty was hired by Greirson in the 1931 to create Industrial Britain, a filmic survey of the industrial power of the United Kingdom. It’s quite amazing to see how abstract and poetic the aesthetic becomes at points.

Housing Problems (d. Arthur Elton, 1935) Is a very early example of the observational mode of documentary making. Tenants in the UK housing slums were interviewed in their crumbling dwellings. Unusually for it’s time the director provided the opportunity for the subjects of the film to speak their mind on camera. While these interviews are book-ended by the expository voice of authority, it was non-the-less rare to hear anything other than received English in the media at that time.

The film strikes at the conscience of the British viewing public. An interesting footnote to this innovation is that the film was commissioned by a commercial organisation which built alternative housing and would directly benefit from the slums being demolished. Is the moral mission behind this film compromised when it is understood to also be propaganda, shrewdly designed to shift public opinion and aid political lobbying for commercial gain? In my view, yes. I would argue in order to understand the ethical components in the film one must consider who will benefit and how such intensives influence a director’s editorial freedom. The film is not completely undermined, but this information certainly tarnishes the moral clarity of Arthur Elton’s film.

Lonely Boy (1962), is a National Film Board ‘candid cinema’ documentary about the former teen sensation and Canadian Elvis rival, Paul Anka. The unusual thing about this film is the emotional distance the film makers demonstrate from their subject of study. Rather than Anka, the documentary examines his fanatical fans. I was left with the feeling that the directors, Kroitor and Koenig, demonstrated little empathy for the screaming teenagers, instead they looking on through a cool ethnographic lens.

‘Cinéma vérité… combines improvisation with the use of the camera to unveil truth or highlight subjects hidden behind crude reality.

It is sometimes called observational cinema, if understood as pure direct cinema: mainly without a narrator’s voice-over. There are subtle, yet important, differences among terms expressing similar concepts. Direct Cinema is largely concerned with the recording of events in which the subject and audience become unaware of the camera’s presence: operating within what Bill Nichols… calls the “observational mode”, a fly on the wall. Many therefore see a paradox in drawing attention away from the presence of the camera and simultaneously interfering in the reality it registers when attempting to discover a cinematic truth.

Cinéma vérité can involve stylized set-ups and the interaction between the filmmaker and the subject, even to the point of provocation. Some argue that the obvious presence of the filmmaker and camera was seen by most cinéma vérité filmmakers as the best way to reveal the truth in cinema. The camera is always acknowledged, for it performs the raw act of filming real objects, people, and events in a confrontational way. The filmmaker’s intention was to represent the truth in what he or she was seeing as objectively as possible, freeing people from any deceptions in how those aspects of life were formerly presented to them. From this perspective, the filmmaker should be the catalyst of a situation. Few agree on the meanings of these terms, even the filmmakers whose films are being described. 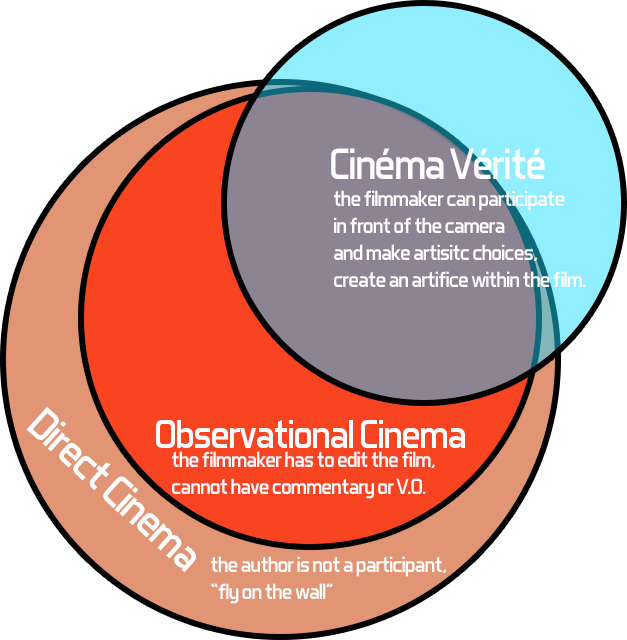 The director of Shoah, Claude Lanzmann (1985), devised a barber scene with Abraham Bomba, the subject. Bomba hadn’t cut hair in years but understood and agreed to the context of the interview because, presumably, he believed in Lanzmann’s mission to document the atrocities of the Holocaust.

The crucial and defining moment in this interview takes place from 00:12:40 onward. Lanzmann pushes Bomba to talk about his friends and neighbors whose hair he cut while fully aware of their impending mass execution. We see Bomaba start to choke up but Lanzmann persists. This forcefulness is some how permissible in a scenario where the subject of the film has previously helped construct the scene. Prearrange consent afforded the director enormous freedom to challenge his subject. He does this in a way which would be inappropriate were the artifice less collaborative. The tangible presence of the camera and director transforms the interview into a interrogation.

Louis Theroux’s My Scientology (d. John Dower, 2016) is, at it’s heart, a exercise in Cinéma-Vérité. Because Theroux had such difficulty accessing the active Scientology community he could only rely on the testimony of former members who had renounced the religion as a dangerous cult. Much of the film focused on insights provided by Mark “Marty” Rathbun, who held one of the highest ecclesiastical positions whit in the church and was close to the center of Scientology’s inner circle. With Marty’s help Louis re-stages some of the most incriminating moments of abuse alleged against David Miscavige, the current leader of the Church of Scientology (official title: The Chairman of the Board of the Religious Technology Center and Ecclesiastical Leader of the Scientology Religion).

Theroux was heavily criticized by Mark Kermode (BBC radio 5 live, 2016) for not adding to the preexisting body of knowledge established in Alex Gibney’s film Going Clear: Scientology and the Prison of Belief (2015), which was characterized by Kermode as forensic in it’s approach. While Kermode does address the similarities between My Scientology and The Act of Killing (d. Joshua Oppenheimer), another contemporary Cinéma-Vérité excercise, he gives little credence to the value of the staged performances.

I believe Louis Theroux, being aware of Gibney’s approach, did not attemp create a comprehensive exposé of accusations railed against the church. Instead his well practiced and distinctively unassuming interview style afforded extraordinary access to former members of the church. Marty Rathburn, by participating in the casting actors, leading their training and by directing the final reenactment, revealed far more than would have emerged in a conventional interview. The focus of the film seems to shift in the third towards Marty’s lack of remorse for the abuses that he was directly involved in. We see, during the violent reenactment of Miscavige’s alleged abuse, Marty appearing switched on and excited. The audience is haunted by the idea that  Theroux’s collaborator, behind all his suffering at the hand of the Church, is genuinely a ‘nasty piece of work’. We are left wondering, had he not fallen out of favor with Miscavige, would Rathburn have continued to this day enforcing the harsh laws of the religion while administering corporal punishment and psychological abuse?

Hello, I’m Alex Widdowson. I’m a London based director and animator.  I specialize in making animated documentaries about neurological and psychological forms of difference.

My most recent film, Music & Clowns (2018) was released by the New York Times and received nine international awards.

I am currently a Wellcome Trust PhD candidate on the Autism through Cinema project at Queen Mary, University of London, where I research the ethics associated with a non-autistic filmmaker representing autism through animated documentary. In addition I freelance as a 2D animator, I teach MA Animation at The University of Hertfordshire, occasionally write for AnimatedDocumentary.com and I am the festival producer for Factual Animation Film Festival.

I have a MA in Documentary Animation from the Royal College of Art, UK, and am an alumnus of the AniDox:Lab from the Animation Workshop in Denmark.