Week 3 of the What’s Up Doc? elective was run by Katerina Athanasopoulou, visiting lecturer in animation at the Royal College of Art. She tasked us with making a psycho-geographic video portrait of the landscape. This was then presented as unedited rushes in a group crit later that day.

The morning began with Phil Ilson, the co-founder of the London Short Film Festival, leading a tour of Shacklewell Lane in Dalston. The festival’s offices had been based in the area for a number of years. Although Ilson didn’t live locally, his passion for British cinema and natural curiosity about the local history was eye opening. He drew our attention to tangible records of life, culture and politics that were etched in to the surrounding streets and architecture.

During our group discussions my attention was repeatedly drawn to what felt like a local anxiety regarding gentrification. On the same street where I saw an Afro-Caribbean hairdressers, which looked like it had been there for decades, there was also a sleek yoga centre, which was founded in 2012.

I was interested in the nuanced perspectives of both long term and more recently arrived Hackney residents. There seems to be a clear line which connects Margret Thatcher facilitating the private purchase of council houses in the 80’s, up to present day Dalston where property prices are starting to push out small businesses and long term residents. In the past decade many artist and creative professionals have moved to Dalston, attracted partly by the former industrial spaces being converted into low rent studios. Meanwhile an independent cafe and bars scene developed, fueled by their patronage. The aggregate effect was that Hackney rapidly transformed into an fashionable place to live and work. It has started to attract Londoners who have more disposable income that both the long-term residence and those in the creative industries.

I picture gentrification as a set of concentric rings, each layer representing an era and the community that settled during that time. The population of each ring looks inwards at the preexisting smaller rings with affection and curiosity.  This encircling effect issn’t immediately see as threatening from the point of view of the bigger ring. However this ring community simultaneously looks out at the newer larger rings. They see their greater wealth and influence encircle them, leading to a sense of suspicion and claustrophobia.

Looking up at the two tower blocks that were being assembled in front of us in Dalston, the group speculated about who would move into these fancy new flats. 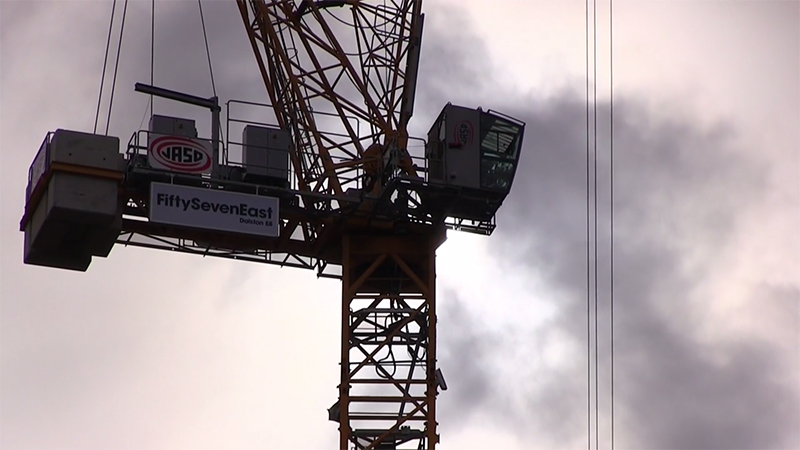 My dad, a retired civil engineer, used to say that you could measure the health of the British economy by counting the number of cranes across London’s skyline. From below, however, these monoliths loom over the existing inhabitants of Hackney; a immutable sign of change. Cranes are simultaneously an index to the potency and destructive force of London, one of the worlds largest neo-liberal experiments.

I initially wanted to call the film Peckham, but changed my mind because of concern I was over-stating the point. Crane is an the closest and least pretentious I could get to the film being “Untitled”. In my experience, another area of London which seems to at a simlar stage of gentrification is Peckham Rye. The artist have been there for a while, the hipster cafes and bars followed. It is now recognised across London as somewhere that is “cool”. However I haven’t yet observed large property developments in Peckham. Brixton, on the other hand, seems to be slightly ahead of Dalston in that the rents have already gone up.  Large chains have moved in and the old businesses are on their way out. 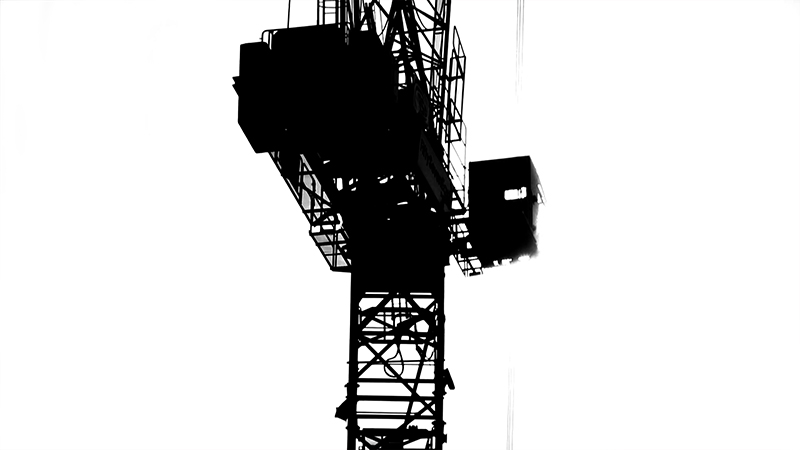 While filming, the camera’s digital screen couldn’t represent the fidelity of the image being recorded. I saw a stark black and white silhouette. After staring for a long time my eyes created an Esher like optical illusion. My three dimensional interpretation of the 2D black and white image jumped from looking up to looking down from a 45° angle. While I did like the conceptual value of this shifting view point I was keen not to tamper with the raw footage. For the same reason I decided not to remove the natural glitches produced in camera.

The small camera screen also lead to a nice surprise in the edit suit when I noticed the crane had the ‘Dalston E8’ written on the side. This reveal becomes an essential piece of evidence supporting the psycho-geographic frame of the film. If this wasn’t visible I would have used something similar for the film’s title.

Hello, I’m Alex Widdowson. I’m a London based director and animator.  I specialize in making animated documentaries about neurological and psychological forms of difference.

My most recent film, Music & Clowns (2018) was released by the New York Times and received nine international awards.

I am currently a Wellcome Trust PhD candidate on the Autism through Cinema project at Queen Mary, University of London, where I research the ethics associated with a non-autistic filmmaker representing autism through animated documentary. In addition I freelance as a 2D animator, I teach MA Animation at The University of Hertfordshire, occasionally write for AnimatedDocumentary.com and I am the festival producer for Factual Animation Film Festival.

I have a MA in Documentary Animation from the Royal College of Art, UK, and am an alumnus of the AniDox:Lab from the Animation Workshop in Denmark.